What is a robot?

There are many definitions for robots. In general, a robot is a physical machine or object that is capable of carrying out actions autonomously. Robots can be programmable and have built-in or attached sensors (e.g. distance, temperature, light, inclination). With the use of coding, a robot can change its behaviour or execute a series of actions. Learn more about coding here.

Some examples of robots or programmable hardware that you may hear about or wish to work with are: 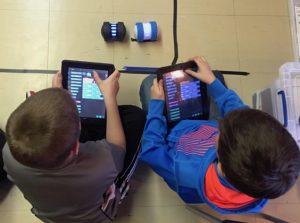 Dash & Dot are a pair of programmable robots designed to help kids turn their code into a tangible learning experience. Watch as Dash & Dot navigate the world based on the instructions you have given it!

Ozobots are small robots that are able to interpret colour sequences as commands. Instead of using text to tell the robot to turn left or spin or accelerate, you use a pattern of colours that the Ozobot can read. This leads to lots of exploration, drawing, and design as students draw maps filled in with coloured “blocks” of code. 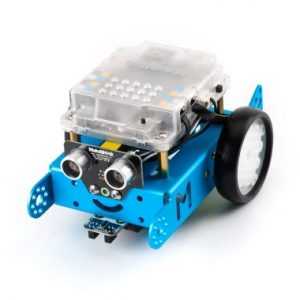 mBots are robots that you get to build and program yourself! Kits include a set of parts, like sensors, cables, wheels, and a body, that you assemble into a vehicle. Then, you can use the MakeBlock programming language to give your vehicle instructions. The latest version of MakeBlock on tablets allows you to control your mBot via bluetooth!

Spheros, sphero minis, and ollies are all programmable robots whose main purpose in life is to drive. The spherical robots are able to turn on a dime, making them useful for navigating mazes and demonstrating angles. Ollies, are larger, faster, and exciting to drive. All these robots (and their newer versions) are supported by the Sphero Edu app. 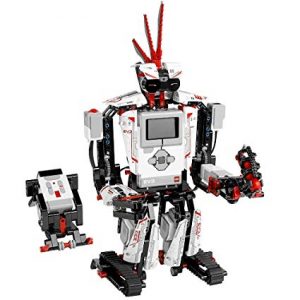 LEGO has always been about creative, constructive play so it is no surprise that they are bringing programming into the mix. With many different build options and a unique program to control your robots, LEGO wants you to bring your robot to life.
Their program works on PCs and Macs and even tablets! 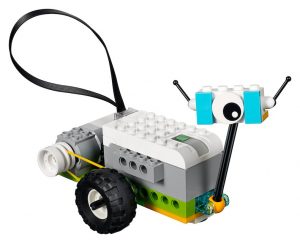 The LEGO WeDo 2.0 is another programmable LEGO kit that distinguishes itself by its accessibility. With just a few motors, pulleys, and LEGO blocks, you can move a car or create a windmill or a catapult. A bluetooth option exists so you can control components directly but this kit is just as fun and educational when used by itself. 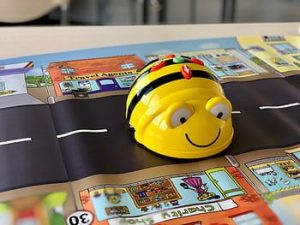 The Bee-Bot is a simple, programmable robot that is geared towards children at the elementary level. It can be programmed to receive a simple algorithm, allowing it to move forwards, backwards, left, and right on a grid. It is rechargeable, robust, and rewarding to play with.

The Blue-Bot is similar to the Bee-Bot. It is the same size and has the same command buttons; however, its clear design allows students to see the inner hardware. Unlike the Bee-Bot, the Blue-bot has Bluetooth capabilities which allow it to be paired with the Blue-Bot app. The app. allows users to program 45 degree turns and use loops and repeats when coding. The Blue-Bot coding app. can be used with or without a robot.

A microcontroller is a programmable circuit board that is ideal for special projects. They are great tools for solving specific problems and for animating or controlling toys and tools that you have made. Some microcontrollers even work with fabric so you can animate your clothes! Others can do advanced tasks like checking the weather, watering a plant, or running a website. They are like swiss army knives and are surprisingly common – many can be found in everyday household devices. 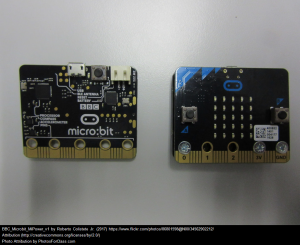 The micro:bit was designed by the BBC for use in the UK education system. It is very affordable, small, and versatile. To use it, the MakeCode website provides a block programming interface that is easy to use. It features interesting sensors like accelerometers, photosensitive LEDs, and even a radio emitter. 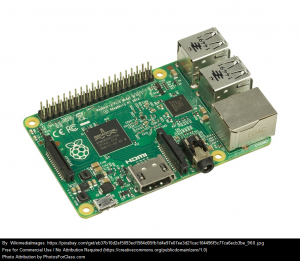 The Raspberry Pi is known as the world’s cheapest computer. It doubles as a microcontroller which makes this device useful for a wide variety of projects or personal activities. Its main advantage is that it can process more than one program at a time. It has WiFi and HDMI and is fast enough to surf the web but can also be adapted for highly specific goals like building an arcade cabinet or a magic mirror. It runs on the operating system Linux instead of iOS (Apple) or Windows (PC). 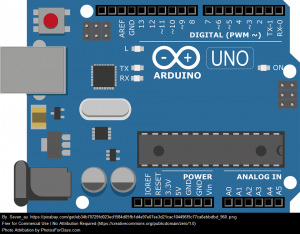 Arduinos are the quintessential microcontroller. They come in many shapes and sizes and are very inexpensive. The main difference between an Arduino and a Raspberry Pi is that the former can only process one program at a time whereas the latter can process many programs at once. While the Arduino may be simpler, it is also less expensive. Programs are written and run using the Arduino software.

The Adafruit Flora is a sewable microcontroller. It comes with micro-USB support making it easy to program. It is round, light, and robust with a large circuit board to play with. It can be used to animate lights, make sounds, and coordinate patterns. It works best with Arduino IDE software and conductive thread. 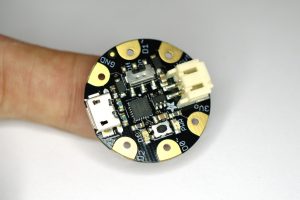 The Adafruit Gemma is a tiny, wearable platform board similar to the Flora. It is a sewable microcontroller that can be programmed over micro-USB using Arduino IDE software. It is smaller than the Flora and has less connections so is better suited to simpler or smaller projects. 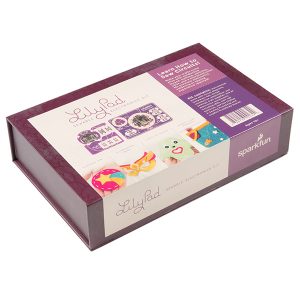 This box set comes with a variety of sewable electronics devices and components. The kit comes with two LilyPad ProtoSnap boards along with buttons, switches, and LEDs. Complete with an instruction manual containing four complete sewable circuit projects, this is the ideal kit for a beginner starting out. 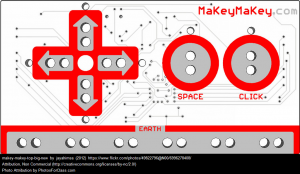 The Makey Makey is a microcontroller that lets you connect to everyday objects. It has a simple interface for connecting conductive materials (like bananas, water, tin foil, etc.) to basic functions on a computer’s keyboard. There is also a reversible side that contains many more ports so you can expand into more advanced circuit-based projects. Great for demonstrating how conductivity works with young children.

The Silhouette Cameo is an electronic cutting machine that can work with a wide variety of materials, from vinyl to fabric. Using Silhouette’s software, you can import images, manipulate and alter them, and cut your design using the many different cutting tools available. The Curio is a larger version that provides more width and depth to your canvas. 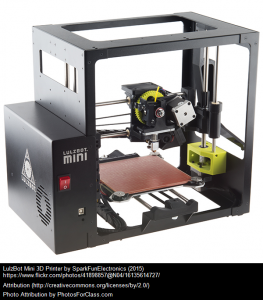 3D printing allows us to create solid objects that occupy space in the real world. 3D printing is an additive process whereby one layer (most often ABS plastic) is added onto another successively until the full object is formed. Printers come in all shapes and sizes. They are promising and versatile machines and are best used for printing unique designs that solve specific problems. There are many different programs that can be used but educators in Quebec can acquire a free copy of SketchUp Pro Software (Computers only) (ask your local RECIT). There are many different 3D printers on the market now as well as services that will do the job for you for a fee. Just as with paper printers, the cost and quality vary greatly. In order to make a 3D printing, you need to create a digital file of an object. As when learning to do anything, it is best to start simple and slowly build your understanding and ability to “think” about an object in 3D. There is a variety of 3D or Auto CAD software available. To learn and explore, it would be best to try out some of the easier free apps. There are 2 also extensions for SketchUp that are important to add: A common mistake that 3D beginners make is designing something that is way too complex. When building your first object try to keep it simple and remember: For More Info about 3D Printing:
Electronic Circuit Kits 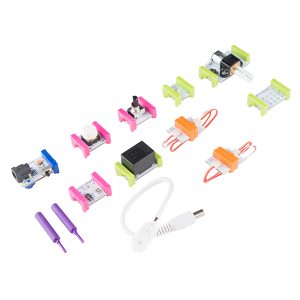 littleBits are electronic building blocks that can be snapped together to turn on lights, make sounds and music, and to power motors and fans. They are intuitive and simple to use and are great for experimentation. They are sold as a kit and all the pieces are powered by a simple 9V battery. 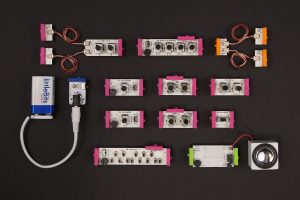 littleBits have designed a kit that contains a coding block that can be modified and controlled by other littleBits. There are many other types of kits that are designed for different projects and activities, from music-making to robotics. 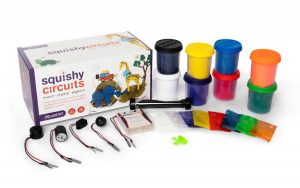 Squishy Circuits are great for introducing younger students to basic circuitry and the difference between conductive and non-conductive materials. Power motors, buzzers, and lights with the power of play dough.